TOUR OF THE ALPS’ STAGES 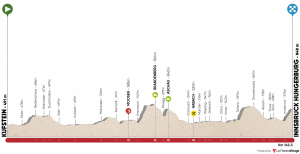 After the pre-race checks and the teams’ presentation in Innsbruck, the main city of Tirol, the peloton will move to Kufstein, near the northern border of the Euregio area, where the first stage will start. The beginning of the stage will be run on a loop to the Walchsee lake, and then back to Kufstein. Then, the race will continue through the Inn river valley up to Kramsach, where an intermediate sprint is placed, and then will turn right by the river’s banks.
Soon after, the two categorized climbs of the day come at short distance from each other: short but tough ascents followed by technical descents on the way back to Kramsach. The lumpy route follows through the Inn valley on the way to Innsbruck, before tackling the final climb to Hungerburg: might be a day for punchy stage hunters, rather than GC favorites. 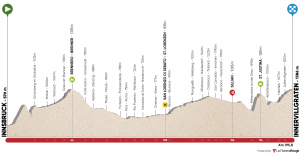 The race gets off from Innsbruck’s city center. After the neutral start, the riders will rider for 15 km through the city and the climb to Patsch, where the official start will be given.
The peloton will reach the Italian border on the Brenner pass, where the first KOM will be place. A fast descent will bring the race to Fortezza, and then through the Val Pusteria/Pustertal to Prato della Drava and the Austrian border. As the peloton returns to Austria, the riders will find the intermediate sprint in Sillian, and then a 16 km way down to Lienz before bending to the left towards the second categorized climb of the day, St. Justina.
After passing through Anras, one of the stage finishes of last year’s Giro del Trentino Melinda, the riders will return to the state highway and back to Sillian. From there, the race will cross the Villgratental up to Innervillgraten, where the stage finish is placed.

From downtown Villabassa, the race crosses the Val Pusteria/Pustertal once again to reach Brunico, and from there through the Val Badia on the way to San Martino in Badia. There starts the 15-km ascent to the Passo delle Erbe, the first categorized climb of the day. A 20-km descent will follow: the first section is very narrow and technique, then leaving way to a faster stretch on the road to Sant’Andrea.
A false flat section will bring the peloton to the intermediate sprint in Luson. There starts an unprecedented ascent in cycling: the 12 km climb – with maximum gradient of almost 20% – to the Alpe di Rodengo, second KOM of the day. A technical descent will lead to Rio Pusteria, then the road keeps going down through Bressanone to Chiusa, where the 9 km climb to the finish in Funes will start. By the end of the stage, the name of the final GC contenders will certainly be clear. 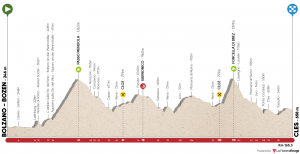 The beautiful Piazza Walther, in Bolzano city center, will host the preliminary operations. From Bolzano, the peloton will ride through the Bassa Atesina to Lainburg’s Experimental Center, where the riders will tackle the short climb to Novale al varco.
A short descent will bring the race to the Caldaro Lake, and then back up to Appiano sulla Strada del Vino, where the first categorized climb of the day, the 14-km Mendola Pass, will begin. From the top, a quick descent to Sarnonico will introduce the riders on the former Trofeo Melinda’s routes; an intermediate sprint will also be placed at the second passage in Sarnonico.
Late in the stage, the 6 km-long Forcella di Brez will be the second categorized of the day. After a first passage in Cles, the peloton will move to Tassullo and, after Nanno’s climb, return to Cles for the stage finish. 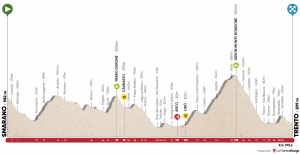 The main square of Smarano, in the Predaia municipality, will welcome the peloton for the preliminary operations. A quick descent through the Valle di Non will take the riders to the Rocchetta, before they start climbing towards Andalo and Molveno. After passing through San Lorenzo in Banale, the route turns right to Stenico, and then down on the Caffaro’s state highway for a short stretch before turning left.
After a 6-km ascent, the riders reach the first KOM of the day, the Passo del Duron. The descent to Fiavè will lead to the foot of the Passo del Ballino: the climb and the following descent will take the riders into the Garda Trentino, passing through Riva del Garda, Nago-Torbole (including the short and steep Nago Vecchia climb), and then down to Arco for the last intermediate sprint of the race, dedicated to the city of the G.S. Alto Garda, the organizing company of the Giro del Trentino and – now – of the Tour of the Alps.
Passing through the Valle di Cavedine, the race will reach Lasino, where the last categorized climb of the race, the 22-km ascent to Vason di Monte Bondone, will begin. A fast descent will bring the riders to Trento, passing through the western part of the city to the Gottarda circuit up to Mattarello, where the 3-km Novaline climb is placed: the last sting, just 10 km away from the finishing line in Piazza Duomo, in the heart of Trento.